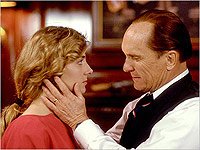 This is a haunting, psychologically compelling story about what the United States might be like under a right wing, fundamentalist theocracy. Adapted by the acclaimed playwright Harold Pinter from the novel by Margaret Atwood, this is a tale of the suppression of women by a totalitarian state called the 'Republic of Gilead.' In some respects one is reminded of Orwell's 1984: the endless war from without, designed to keep the populace preoccupied and beholden to the state; the paucity of basic food stuffs and consumer goods expect for the ruling class, the general hopelessness, etc. There is horrendous pollution so that most women are not fertile, yet the state needs babies for the war effort and the economy. Consequently women's bodies are taken over by the state, and those women that are fertile are made to bear children for the sterile leaders. Those who are not fertile are reduced to servitude. All overt sexual expression and any kind of activity not in keeping with the strict dictates of the fundamentalist religion is forbidden, and transgressions are punishable by death, sometimes in public hangings. In one ugly scene the handmaids themselves are made to pull the rope that attaches to the noose that strangles a wayward handmaid. This is followed by a man accused of rape being thrown to the handmaids, who literally rip him apart with their bare hands.

Natasha Richardson has the starring role as a fertile handmaid for the Commander (Robert Duvall). She is not artificially inseminated (presumably since that would be against the dictates of the religion, which is, by the way, a kind of repressive fundamentalist Christianity), instead there is a 'ceremony' in which the Commander's wife (Faye Dunaway) holds her hands (as they both wear veils) while the Commander with his clothes still on--Well, one can imagine.

I read the novel some years ago and was struck not by Atwood's attack on fundamentalist Christianity as much as I was by her attack on men, period. Harold Pinter's screenplay and Volker Schlondorff's direction emphasize the hypocrisy, willful ignorance and anti-human aspects of fundamentalism while attributing the sexism to the patriarchal religion. What is stunningly topical (viewing this in the year of Our Lord 2002) is the parallel between the repressive fundamentalist theocracy of Atwood's vision and that of the Taliban. The subjugation of women, using them strictly as servants or as reproductive machines, their bodies covered and their heads veiled (in bright red), is a striking bit of dead-on foresight by Atwood, Pinter and Schlondorff. This movie was perhaps made a decade ahead of its time.

Richardson is very good in her characteristic way. She has a quality unlike most movie stars in that she projects primarily not her looks or charisma or even her vitality, but instead her individual will, a quality that is exactly right for the part. Faye Dunaway as the commander's wife acts out (in contrasting blue) a kind of Daughters of the American Revolution club woman mentality to a tee. Duvall is wonderfully slimy as a warlord hypocrite always claiming to act in the name of God. (Seems familiar.) Elizabeth McGovern is believable as a sexy lesbian handmaid (a 'gender criminal') while Victoria Tennant ("Aunt Lydia") is a kind of drill sergeant housemother to the handmaids. Aidan Quinn gets to be Richardson's heroic lover.

This may not be entirely faithful to the book, but it is a fine work in its own right. The direction is intelligent and focused and the script by Pinter excellent. The acting is superior all around and the story is true in a psychologically sense. This movie is also a warning that it could happen here.

(Note: Over 500 of my movie reviews are now available in my book "Cut to the Chaise Lounge or I Can't Believe I Swallowed the Remote!" Get it at Amazon!).

Review by DeeNine-2 from the Internet Movie Database.