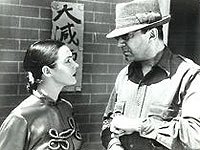 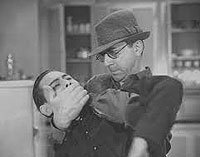 The serial from which this piece of drek was edited runs at 300 minutes. Given that that 300 minutes will include a certain amount of duplication and easily losable material: the opening, and end credits, a wee reprise before the cliffhanger ending, and maybe one of the scrolling Flash Gordon / Star Wars "Episode 4 the bad guys have trapped..." intros, there is still no way on Earth anything of that length could have been edited down to a mere 65 minutes and retained any kind of coherence it may have possessed. Not having seen the original I can't comment on the story as it was intended to play over the 15 chapters but what is left doesn't leave much hope for it having been any better.

The hero, plucky girl reporter heroine and side-kicks move around as if they were all glued together in some way. The direction is so clumsy, and the movie making so cheap, that often they will move across a room en masse to where the next set-up is to be so that they can all crowd into the same frame and do away with the need for any matching shots or close ups. The high spot of this technique was the moment when, realising the man they were searching for was in the next room, all four of them left the villains they had been pursuing forever, unguarded and went through to look at his comatose body for just long enough for the arch-villain (Lugosi) to appear put his minions under the 'fluence and escape with one of them.

This is dross. It was dross when it was made. It does however hold some sort of record for the number of 'people lurking outside half-open doors listening to conversations' shots in any feature film of the 20th century.

Review by wes-connors [IMDB 20 June 2008] from the Internet Movie Database.