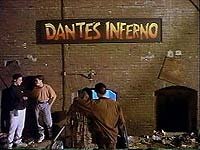 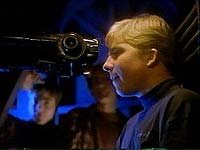 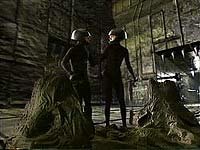 I just recently discovered this wonderful piece of late 80'searly 90's Sci-Fi and decided to give it a look-see. I am a big fan of Full Moon so I figured it would be fair, but it actually exceeded my expectations. The set-up is simple: a new virtual reality type video game called Arcade is more than it appears to be. Kids are getting spaced out, and disappearing all-together. After a tight-knit group of friends falls prey to the game, the last remaining members must fight to save the others.

The film contains some very familiar faces. The lead is the beautiful Megan Ward... the ultimate girl next door. The film is worth it just for her cuteness factor alone. You may recognize her from other Full Moon classics like Crash and Burn and Trancers 2 & 3. I couldn't help comparing her to the Nancy character in A Nightmare on Elm Street. Her role is very similar. A young Seth Green (Austin Powers) is one of the group, as well as an aging Peter Billingsley (A Christmas Story).

The running time is short, but with a few more additions this movie could have been epic, as in The Crow epic. A touch more gore would have been good, since it already had an 'R' for language (what a waste- I think they swear twice). If the target audience was preteens, why not go for PG-13? The story is tight and the ideas predate films like The Matrix, which borrowed heavily from Arcade. Most obviously is the concept that what happens in the game happens to you in real life (aka your mind makes it real). In the game you can actually get "sucked in", but let's not get too technical. The chemistry among the kids is what makes the film work. Many reviewers have complained about the CGI. Remember that this came out in 1993, so computer animation hadn't matured yet. Also bear in mind that they didn't have the budget of productions like T2 and the access to ILM for top-notch effects. In the featurette after the movie, Charles Band stated that he wasn't very happy with the first generation of special effects, so it was shelved for three years before the effects technology could mature a bit. The film itself was shot in 1990. You can't sit here in 2011 and watch it and blindly say "those effects stink". You have to put in the right perspective.

Keep in mind that Full Moon flicks are low budget, and often direct to video, but this is precisely WHY fans love them. They are not the billion-dollar blockbuster movie-for-the-masses junk. There is alternative music that only serious music lovers seek out (because it is unique) and there are alternative movies that you can connect to on a more emotional level. Arcade is one of them. The whole movie had a great alternative feel to it, like the dingy arcade where they went to play video games. It hearkens back to the sleazy warehouse bars where raves and such are held. It's just the kind of place teens would hang out.

Arcade is a real treat for filmgoers who appreciate films that are low on budget, but high on spirit. This is one that definitely deserves a DVD release... especially considering the trash on DVD today (go rent Alien 3000 for a look at the moronic crap I'm talking about). Unfortunately, many Full Moon productions are not pressed on DVD, and that is a shame. The real tragedy is that with all the video stores renting exclusively DVD, films like this are now completely lost to the next generation. Hit up Ebay or Amazon and find a used VHS for a couple bucks.

Review by dominion76251 from the Internet Movie Database.