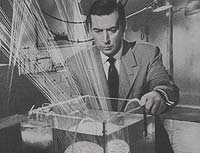 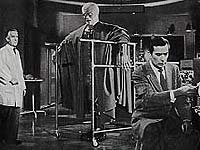 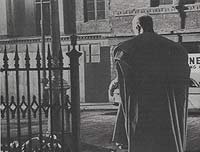 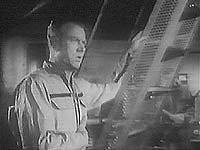 There have been a lot of stories about brains being separated from their owners' bodies and kept alive for one reason or another. Usually the brain is that of a genius, as in John Hersey's 1960 novel. Sometimes it's an evil brain or a mad brain. Here it belongs to a genius, run over by a truck while in his prime.

His equally brilliant brother (John Barragray) is an expert on automation. That's a fancy word for "robots." The father (Otto Krueger) is a renowned neurosurgeon. When you put the three of them together -- the brain of a brilliant young scientist, his automating brother, and his neurosurgeon father, you merely put Tab A into Slot B, and you get a robot with an exceptional brain.

The performers are okay. Alas, Otto Krueger has aged since he was the suave villain in Hitchock's "Sabotage," not so much in his appearance as in his speech. It sounds as if his dentures were sliding around. Barragray, the automating brother, has a voice made for radio but his looks fit the template of the role. Robert Hutton as a scientist who is a friend of the family is painful. The poor guy. Mala Powers is the wife of the lonesome brain, the brain that's asleep now in its fancy aquarium. She is a knockout in the most wholesome sort of way. She looks like a particularly buffed version of the girl next door, if the girl next door looked like Mala Powers. A serious actress too, a committed follower of Michael Chekov.

Anyway, the resulting robot resembles a human being as painted by some futurist nut. It has a body like Frankenstein's monster and a simulacrum of a barely human metal head and face. I don't know why the faces of these robots have to look so threatening. A normal human mask can be pretty scary. "Les Yeux Sans Visage" -- "Eyes Without A Face" -- are pretty eerie. A Guy Fawkes mask is unsettling.

Anyway, this robot, although a giant, is no Frankenstein's monster. With its supports removed, it stumbles to a mirror, gets a look at itself, lets out a shriek, and flops on the floor. Any one of us who has looked into a bathroom mirror the morning after a particularly troubled night can immediately empathize. But if the robot is ugly, it's also clairvoyant and predicts a collision at sea involving a passenger ship called the Viking. The film was released in 1958, probably written in 1957. Barragray is stunned when the TV news reports the collision, showing the listing Italian liner Andrea Doria, which was sunk by collision the year before. Actresses Betsy Drake and Ruth Roman were among the survivors. The incident was still fresh in the public's mind.

A year later and the wretched thing is no longer speaking in drawn-out electronic gargles but is fully articulate. And, like other monsters before him -- the invisible man, Frankenstein's creation -- he goes round the bend, driven by his ego. But instead of running for president, he paralyzes his surgeon father and bursts through the laboratory door to take a walk outside. Discovering that his brother is in love with his wife (or widow) the monster commits fratricide and then goes irretrievably mad. The ending is more or less arbitrary and not worth much attention.

Sometimes these Grade B monster movies can be diverting. I found this one to be more irritating than anything else.