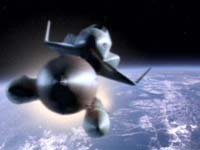 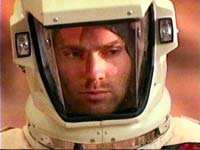 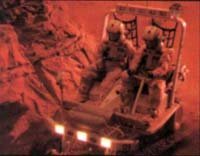 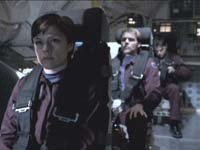 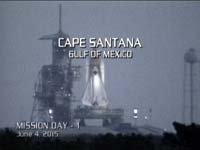 Robert Zubrin, head of the Mars Society, once described the red planet as the next logical step for the space program. It unquestionably has seemed that way for generations of filmmakers, as films as wide-ranging as 1955's Conquest of Space and 2015's The Martian. The mid-late 1990s, too, saw a spat of Martian films, appearing on both the big and small screen. One of them was UPN's 1999 made for TV effort Escape from Mars.

Set in the then far off 2015, Escape from Mars follows the crew and mission controllers of the Sagan mission, slated to be the all-important human expedition to Mars. Funded by the private sector, the objective is to establish a foothold on the planet while finding precious jewels that will help turn a profit for the mission's backers. It's an intriguing notion and one that has proven to be increasingly foresighted with the rise of companies like SpaceX on the space flight scene. A scene early on, where viewers learn that it's also being financed by the sale of memorabilia and online rights, brings to mind the now abandoned Mars One proposal. Indeed, the mission as seen on screen incorporates elements from some real-life proposals that provide it an air of verisimilitude in places, at least for the first half of the movie.

It's in the second half where the title comes into play. Having gotten to Mars, the astronauts find themselves potentially stranded thanks to a meteorite storm that damages the Sagan. In many ways, this portion of the movie feels like a prototype version of the aforementioned The Martian, albeit with the whole crew present and less emphasis on the actual mechanics of survival. Which still sounds promising.

Except that what writers Jim Henshaw and Peter Mohan focus on both here and throughout the movie is drama, often needlessly so. Trying to perhaps humanize the astronauts, Henshaw and Mohan throw generous doses of cliches into the story, and never once to its benefit. One is getting a divorce, which they don't want to admit. Another misses her lover, making her wonder if the mission is ultimately worth it. Even when some intriguing twists get thrown into the mix, like someone losing a family member mid-mission, it gets handled in a rather ham-fisted fashion. Even the eventual ending feels heavy-handed, laden as it was sentiment. All of which serves to undermine the movie as a whole.

As does the low budget that Escape from Mars clearly had. The CGI used throughout for the Sagan is late nineties computer graphics in all their glory, never being totally convincing and even distracting. That's partly down to the fact that, to take advantage of stock footage for the launch, it's fundamentally a Space Shuttle Orbiter with minor modifications, which rather strains plausibility when it has to land on Mars. Mars itself ends up represented by a rock quarry, a trick that fans of the original run of Doctor Who will recognize, with scenes which are always shot tightly, often with a red filter laid over them. That said, that are moments where director Neill Fearnley turns the budget to his advantage, such as the scene that shows artificial gravity coming into use during Sagan's long sojourn to the red planet. On the whole, though, the lack of a budget to realize the script's vision is sadly apparent from practically the very first scene.

Thankfully, the film's cast helps to salvage things. Christine Elise wouldn't have been my first choice for an astronaut but, all the same, equips herself fairly well, given the confines of the script. Surrounding her as genre veterans such as Michael Shanks and Peter Outerbridge among her crewmates, Shanks coming across the most convincingly of the five. Mission Control fares better with Julie Khaner's Flight Director being perhaps the most rounded character in the piece. No one gives an award-worthy performance but, that being said, they do their best with an at times unwieldy script.

As low budget, made for TV fare goes, Escape from Mars is pretty decent. Certainly, its ideas and cast help it out, especially in trying to overcome some of the issues the script has. For those dreaming of a mission to Mars, though, it'll be catnip, even if it isn't in the same league as The Martian.

Review by timdalton007 from the Internet Movie Database.