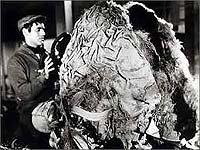 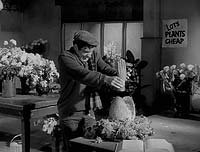 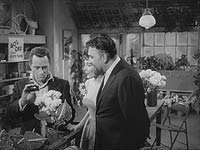 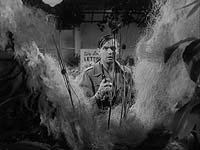 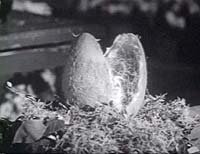 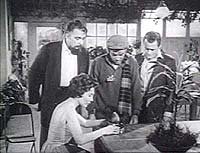 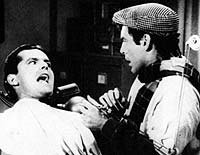 Bumbling, fumbling Seymore(Jonathan Haze) works at Mushnick's Flower Shop, for an owner with a hair-trigger temper and little tolerance for his clumsiness and ineptitude. What I found humorous about LITTLE SHOP OF HORRORS was the fact that Mushnick, a flower salesman not only hates what he sells but is too easily angered to work in customer service. He is one outburst away from a coronary and struggling to survive with a business that doesn't produce isn't exactly helping matters any.

Seymore has a domineering mother(Myrtle Vail) who always goes on about how ill she is even though a doctor's report claims she's so fit she "could play fullback for the Rams." Seymore is an easy victim who has few opportunities to rise above mediocrity, a likable but vulnerable chap, a bit dim-witted and awe shucks, whose unusual plant may be the only saving grace which can help him keep his worthless job as a flower preparer and courier. The unusual plant, he names Audrey, Jr. after a girl who works at the flower shop, is essentially a giant mouth which chops open and shut when desiring sustenance.

The plant seems to be dying until Seymore cuts his finger, and the blood seems to encourage a voracious appetite which leads to its growth at a stunning rate. But without a continual blood supply Audrey, Jr. will cease to exist. When the plant talks ("Feed me!"), Seymore, dumbfounded and surprised, will try to keep it from getting malnourished, but how will he be able to provide the needed blood to satiate its thirst?

The plot, a talking plant which loves to eat humans, is preposterous, but that's part of what has made this an enduring cult classic. The subject matter is certainly ghoulish: how Seymore, who accidentally lends a hand in a drunkard's demise, splattered by an oncoming train, getting rid of the evidence by feeding the victim's remains to Audrey, Jr. which only leads to inescapable consequences for the feckless misfit. The scene where Mushnick finds Seymore feeding a foot to Audrey, Jr. is too wonderfully absurd not to laugh. Of course because he's making a profit from Audrey, Jr., Mushnick won't inform the police and instead decides to benefit from its popularity. The deranged screenplay doesn't stop there. Seymore, with a serious toothache, decides to go to the worst dentist imaginable, known to torture his customers, and the result ends tragically in another victim at the hands of this dufus. It's only a matter of time before the cops start coming around to ask questions, particularly since the man hit by the train was a detective! There's even a Society of Silent Flower Observers of Southern California who wish to present Seymore with a trophy for his plant! Charles B Griffith has provided a lot of amusing scripts for Corman during their early days prior to the great Poe films with Price, but LITTLE SHOP OF HORRORS is one of his most warped and wacky.

A great cast includes Jackie Joseph, a delight as bubble-headed but sweet Audrey, who is committed to Seymore until he starts "raving" about the plant and its true nature. Mel Welles as Gravis Mushnick is also a treat, with a funny scene where he uses Audrey, Jr. to save himself from a dangerous thief, willing to conceal the deadly secret of the plant devouring folks until Seymore wins the trophy. Corman Dante regular Dick Miller has a hilarious cameo as a patron who comes into the flower shop to buy carnations for eating purposes! Oh, and you know I can dare not leave out a totally bizarre cameo by Jack Nicholson as an undertaker with a demented enjoyment for pain, so gleeful of his visit to the dentist office that he practically has an orgasm when a nervy Seymore (having just killed the real dentist) pulls a tooth. When Seymore feeds an entire man to Audrey, Jr., followed by a belch, you kind of understand why it has such a reputation! Another visitor to the flower shop, quite a regular since she seems to lose relatives at an exorbitant rate, is Ms. Shiva(Leola Wendorff), always with a sob story (seems forced so she can get a cheaper rate for flowers she purchases).

The ending, when some buds blooming unveil Seymore's misconduct, just accentuates the film's overall black comic tone. The film does parallel A BUCKET OF BLOOD is many aspects, such as the dense hero and final chase by the cops after their criminal.