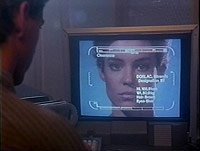 Well, this offbeat sci-fi outing with horror shades was something different, but no better for it though. Nonetheless I thought it was more favourable than its reputation, but still average at best to understand why it's virtually forgotten. It had me thinking of Paul W. S Anderson's 1997 Sci-fi, horror "Event Horizon".

In the quest to find an alien life form, a small space crew charts out a ship which its mysterious captain only shows himself in hologram form. Instead of a peaceful journey they find themselves at the mercy of a killer computer aboard the spaceship that seems to be infatuated with the captain.

A staple of haunted house devices, but set-up in a floating one in outer space. While "Nightflyers" has those moments, its main threat happens to be the psychotic mother computer that controls the spaceship, but releases emotional outbursts towards the crew. And no it doesn't have any relations to Hal-3000 from Stanley Kubrick's 1968 influential Sci-fi classic "2001: A Space Odyssey (1968)". Adapted from a novel by George R.R. Martin, "Nightflyers" is quite a slight, fashionable b-grade presentation that's moodily presented with efficiently catered special effects and tautly constructed, if misty set decors. However the screenplay just isn't up to par, as the novel concept is thinly brought across and turgidly meanders too often making it not stimulating as it could have been. For a plot that's trying for tailored drama with character depth or personal journeys to awaken some sort of psychological tension, it falls flat and then reverts to cheap jolts (and there's quite effective one too) and ridiculous developments. Credit due though to a confidently deep-seated performance by Catherine Mary Stewart, who remained head over heals compared to the rest of the over or undercooked acting. Also in the cast are Michael Des Barres (over-the-top as ever), Michael Praed, James Avery, Glenn Withrow, John Standing, Helene Udy and the agreeable Lisa Blount. Director Robert Collector's taut execution is a tad flat and tired, but doesn't entirely rely on being bounded by special effects with some atmospheric illustrations and creepy ambiance to certain sequences. The chintzy sounding music score arrangement didn't help matters.

Review by ParkingWithoutTheA [IMDB 25 April 2011] from the Internet Movie Database.