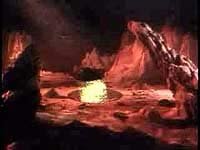 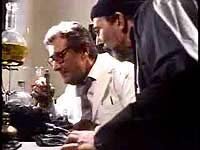 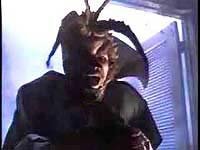 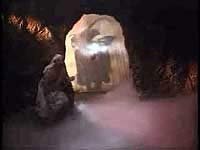 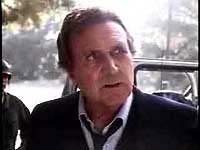 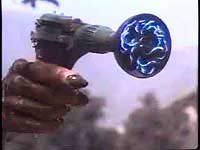 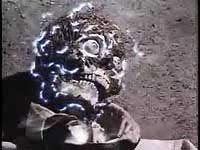 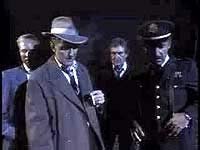 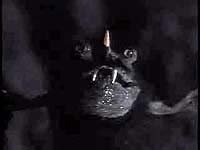 So what have we got here with this "Lobster Man From Mars" (1989) movie? Think "The Producers" (1968) meets "Plan 9 From Outer Space" (1959). If you don't get parody you should give this one a wide berth. If you want really "clever" parody you should probably skip it as well. If you thought Buster Crabbe's Flash Gordon stuff was fun because it was so "unintentionally" hokey you might want to go into avoidance mode along with the others.

The hokey elements in "Lobster Man From Mars" are anything but unintentional, it wants your attention like a one-trick pony mad for a carrot. This lack of subtlety would pretty much doom the thing had it not already expired from a case of terminally lame screen writing.

The root of the problem is that they were given too much money to make this thing. Much like the fake disaster movie playing in the background of "Drive-In", it utilizes a film within a film device; only this time a Hollywood executive is screening what is supposed to be a bad "student" film. The saving grace of bad student films is their unity of weak writing, poor production values, and unpolished acting. But the student film being viewed in "Lobster Man From Mars" has some recognizable cast members and enough money for semi- authentic production design; which does not work to its benefit.

Here's the premise: a Hollywood studio needs a really bad film to use as a tax write-off. They screen a high school kid's science fiction film, which while really bad would be another "Citizen Kane" compared to any bad student film. In the film within the film, Mars is running out of air and sends the "dreaded" Lobster Man to earth where he and a hairy sidekick begin randomly zapping people with a ray gun. The too competent cast includes Patrick Macnee (playing a British scientist) and Deborah Foreman looking (as the film moves along) like she is gradually deciding in favor of retiring from acting (which she actually did-was it coincidence or was her decision made midway through the production of this turkey?).

The problem is that there is very little in the movie that is particularly funny, intentional or unintentional. The only bit that works repeatedly involves the zany space bats who fly around cackling manically. And there is one good line by Tommy Sledge, as a film noir parody private detective who inspects the giant lobster tracks leading away from the site of an explosion and then says: "It means that either he escaped, or he walked backwards from the horizon to commit suicide in this bonfire".

If you want to see this stuff done right, cleverly written and with a student film level of production design, check out Larry Blamire's "The Lost Skeleton of Cadavra" (2001). 90 minutes of inspired spoofing.

Then again, what do I know? I'm only a child.